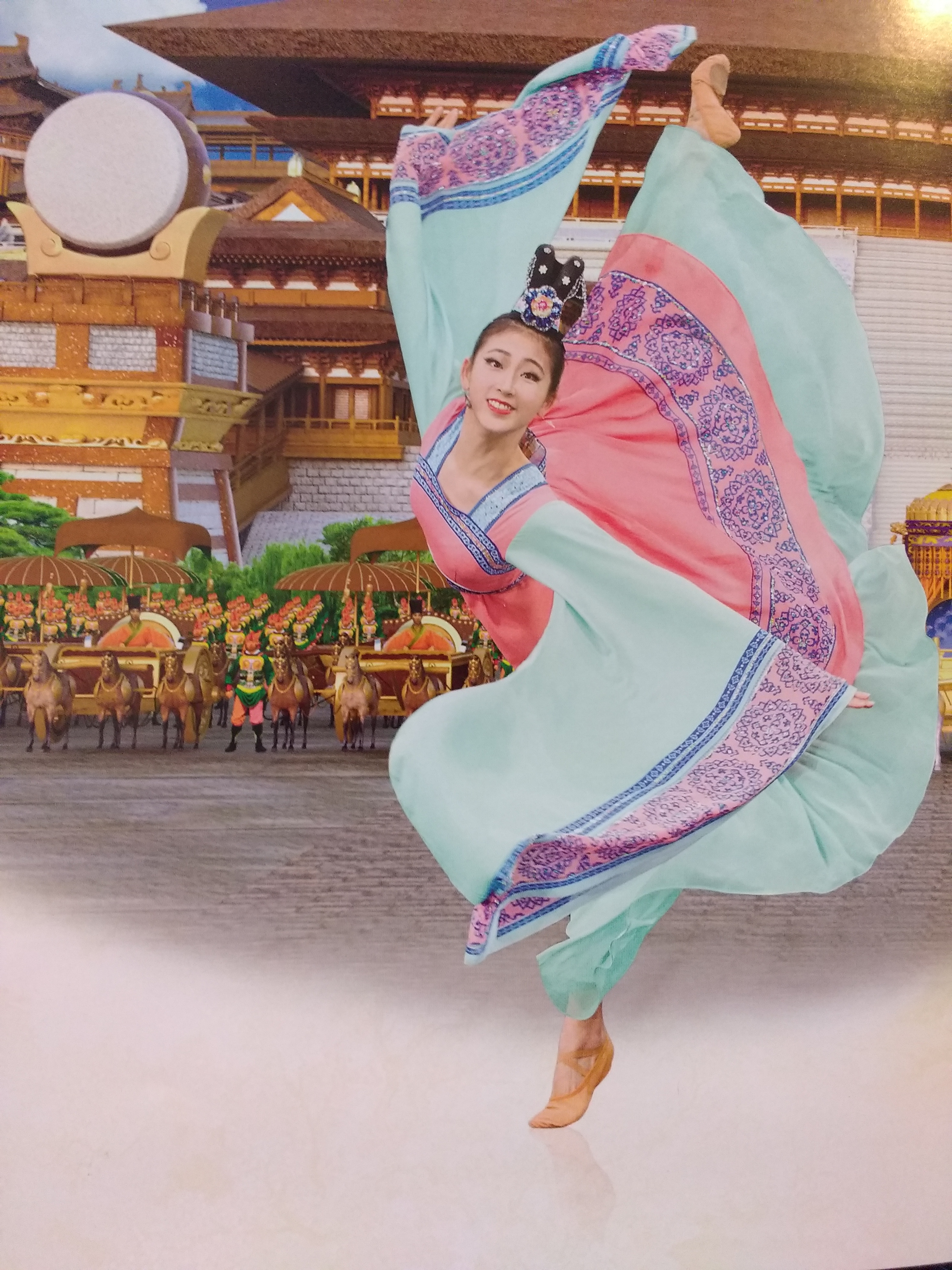 The title of this post is what it is because I willingly bought tickets for Shen Yun based entirely on assumptions that turned out to be entirely false. Maybe you have these same assumptions. I had seen the advertisements, posters, and TV commercials for years, and wanted to take my kids. Shen Yun appears to be a well-crafted production showcasing the art of Chinese dance and, because of the dancers’ poses in the adverts, you may expect some acrobatics as well. Finally, I decided to take my now 18-year-old son and my 21-year-old daughter. First, we went for sushi (excellent and inexpensive at Fin’s on Boylston Street), and then a brisk, frigid dash to the Wang.

Shen Yun turned out to be a performance with the feel of the many, many dance recitals I went to over a long stretch of years to see my dancer daughter perform. Granted, my expectations were high. The fact that this performance is at the Wang lends it a level of gravity, credibility, authenticity, and other “ity’s” that are hard to live up to. Because it is, after all, the Wang!

First, it is costly. The cheapest seat was $80, plus $10 ticketing fee. We went for the $88, plus $10, but there were empty seats and so people moved around a little in order to get some breathing room. The seats are very tight in the balcony, like those on a two-engine, Delta commuter flight. My son was grateful for the aisle so he could sprawl at least one of his legs toward freedom, even allowing the man in front of him to unwittingly rest his elbow on my son’s shoe for about five minutes while leaning over to read the program by the light of the small aisle light. My son thought it would be rude to move his foot once the man had settled in. (Same son told me on the ride home, “I’m not gonna lie, playing with my beard was more fun.” And I had seen him twiddling his college-grown, freshman facial hair out of the corner of my eye throughout the entire performance, so he was not lying.)

Basically, you are wowed by your surroundings no matter how many times you attend the Wang, and then you naturally want to be wowed by what’s on stage. We were, at some moments, brought to the utterance of “Wow,” but not in the right way. As it turns out, Shen Yun is a series of dances (recital-length), some featuring pretty costumes and the famous twirling sleeves. Yes, there are dances with tumbling and flips. Yes, there is a backdrop that changes with each dance and features cool technology in which the dancer can go to the back of the stage and step off while appearing to soar onto the screen as a pre-recorded image of the dancer takes over. It is a fun touch, though my techie son thought the graphics were a tad hokie (my words) and hadn’t been updated since 2006 (his words). The program informed us that this was a patented “system and method for integrating digital background with stage performance” (U.S. Patent No. 9,468,860). The program also wanted us to know that they have openings for orchestra players if anyone was interested, though presumably one wouldn’t be asked to jump into the orchestra pit that very night. It also told us about the choreographers and musicians, about a few of the dancers, and about how to donate to Shen Yun and to Fei Tian, the academy in N.Y. that trains the dancers.

However, buried in a tiny paragraph under “Art with Spirituality” are the lines that “Shen Yun’s performers draw their spiritual inspiration from the meditation discipline and self-improvement practice called Falun Dafa. Also known as Falun Gong, it is rooted in China’s ancient spiritual traditions.” Nowhere in the program does it tell you that you are about to spend a couple hours being told about divine beings and how Heaven is closing soon so you better get your act together. Falun Gong (as my daughter read to us from her phone on the car ride home) “is a spiritual practice founded in China that blends meditation and physical exercise, inspired in part by Buddhism. After rapid growth and massive demonstrations by Falun Gong followers during the 1990s, the Chinese Communist Party began a suppression campaign, banning the practice and jailing, torturing and attempting to re-educate thousands of followers.” (http://www.startribune.com/shen-yun-politics-behind-the-performance/290985131/, February 6, 2015) A group of Falun Gong believers created Shen Yun in 2006 and have grown from one to six dance companies. And growing. It felt, and I said this to my kids, a little like we’d wandered into a cult’s annual performance for their followers.

The evening’s performance started with a dance “From Heaven to Save All” but that seemed like an ancient Chinese story being replicated on stage, not the theme of the evening. Yet after some more dances and twirling, etc., suddenly, we were hit with a modern-day setting and a dance called “Unprecedented Crime” based on “true events.” A young man is imprisoned and blinded on stage in front of our eyes. Later, after he’s released, some divine beings seem to float off the screen and restore his eyesight, in a metaphor for his “reawakened faith.” The audience around us started to murmur. Then a baritone came on and sang while the words were translated and projected on the screen behind him, and, suddenly, you felt as if you were in Sunday school, with the closing line sung three times, “But Heaven’s gates will not be open for long.” Yikes! More murmuring.

Intermission came next, and some people simply up and left. However, at the cost of our tickets, we were sticking it out. During intermission, the three of us stood around wondering when the Cirque du Soleil-type acrobatics were starting while sadly realizing they weren’t going to. Act II hit us with “A Celestial World” (self-explanatory) and then some more quaint dances with stories of devotion and buffoonery (great word) and archery(?). Then a musician came out to play the erhu (a two-stringed instrument of amazing complexity), and she was great, though my daughter wondered why the musician chose to appear for her big moment in what looked like a salmon-pink t-shirt. We were nearing the end for which I was more than ready. A soprano sang another lesson of faith with the words “Most everyone on earth comes from Heaven” (“most everyone”?) and “Many are misled by godlessness and evolution” (“misled by evolution“?).

A note on the instrumental music that accompanied each and every dance: It was all by the same man, known only as D.F., the founder of Shen Yun. Guess who wrote all the words to the two operatic songs, as well? Yes, the same D.F. So the Shen Yun artistic and creative director, as well as chief costume designer and director of classical Chinese dance, who is also a distinguished professor at Fei Tian College, is all one and the same. See, even though he is probably a very nice man, that just screams cult leader to my brain. (Plus the sunglasses and the initials!)

Lastly, we were presented with the big finish of “The Divine Renaissance Begins” to which I admit I irreverently muttered “Teletubbies” when a godlike being came out of a bright yellow sun, with other Crayola-crayon colors of vivid green and blue on the screen. And all the dancers turned to him, hands pressed together in prayer. The program says “a new era of hope begins.” So, yes, a totally positive message, if you’re not one of those distracted by “Modern thought and ways” that “change us for the worse” (D.F.’s words). On the whole, this simply wasn’t what we thought we were in for.

I haven’t mentioned the couple who appeared on stage, speaking alternately in English and Chinese, cracking jokes, and behaving as master and mistress of ceremonies in between each act. They also, to my daughter’s annoyance, were drumming up business by telling us that there was new choreography each and every year, so even though we’d seen Shen Yun once, we hadn’t “seen it all.” After a while, every time the master of ceremonies mentioned “ancient Chinese” anything, in my brain, I said “Calgon, take me away,” which shows my age if you don’t know that famous and famously annoying commercial. (Plus, I was mixing up my Calgon commercials rather horrendously.) I’m sorry to say I found the couple a bit creepy, too smiley, too jokey, too polished and clean, and yes, reminiscent of my daughter’s dance teacher telling me what I was about to see before each dance when, if the dance is inspired, enlightening, and uplifting, one really doesn’t need a verbal intro.

The elbow-rester from earlier approached me in the lobby when it was over to ask me what I thought. Still a little shell-shocked and unsure if I was among similar-minded friends or among Falun Gong devotees, I hedged with “It wasn’t exactly what I thought.” He told me he’d been to The White House (yes, THE White House) earlier in the year and had seen a group who practiced this religion protesting China’s treatment of them outside our president’s home. I’m not sure what he and his wife hoped to learn at the Wang, but they seemed satisfied by the performance. Many did not. Some people around us during the show, especially by the second act, were laughing. Two men behind us said they could easily be asleep (as I used to feel during a long dance recital). When we all wandered out to the lobby at the end, there was not the usual discussion and joie de vivre and camaraderie after a superb theatrical experience. People were subdued at best, mocking at worst.

Was there some solid dance last night? Yes. Enough to carry two-and a half hours of a performance? Absolutely not. (My daughter swore it was four hours, but that was just her perception through a nasty head cold). Plus those uncomfortable seats certainly made it feel endless. Perhaps the true story of the persecution of Falun Dafa, or Falun Gong (presented for the theatre like a dancing version of The Crucible) would make an interesting show, and I can imagine tackling that script. However, this muddled show of lighthearted dance offering vignettes of Chinese history juxtaposed with violent scenes juxtaposed with religious messages doesn’t work. At least, not for me. And it certainly isn’t represented by the Shen Yun adverts.

*All images are from the official Shen Yun program, except the YouTube poster for the Calgon commercial.