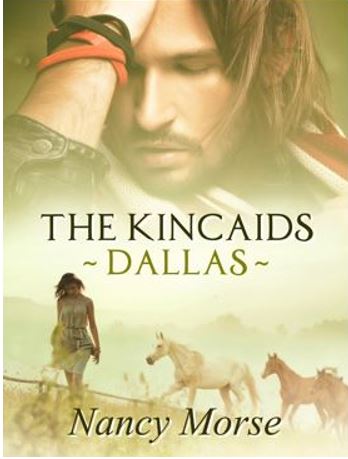 I’m very happy to feature Nancy Morse‘s latest release on my blog today. Nancy is an award-winning author of historical and contemporary romance novels. You can read the summary below of her latest release The Kincaids – Dallas. It grips you from the get-go.

Dallas Kincaid was five years old when the Kiowa swept down from the Llano Estacado in the Texas Panhandle and carried him off. For 13 years he lived among them before joining Sam Houston’s volunteer army to fight for Texas independence, and later riding with the Texas Rangers against the powerful Comanche Nation that threatened settlements in the newly formed Republic of Texas. Now, with the fighting behind him, the battle-scarred loner torn between two cultures has returned to the homestead he last saw as a child, to the mother and older brother he left behind, to the younger brothers he didn’t know he had, and to the love he never expected to find.

Orphaned after her white father and Apache mother were killed in a Comanche raid, Abby McKenna lives a lonely life on the cattle ranch owned by her cantankerous grandfather and suffers his cold hostility for bearing the stigma of being a half-breed.

Dallas’s attraction to Abby is threatened by his struggle to define his own identity and by her grandfather’s prejudice which will not permit the attentions of a man raised by Indians, no matter how hard he fought for Texas independence, giving Dallas one more battle to fight before he can lay the painful past to rest.

Available at Amazon, along with many other great Nancy Morse books.